Roads affect all aspects of development in Southern Africa. Businesses depend on effective roads for transporting their goods, industry relies on roads for delivery of equipment, and people require roads for travel between home, workplaces, and elsewhere in the region.

In comparison with other areas of development, the road network in the Southern African Development Community (SADC) region is relatively strong. Although it varies from Member State to Member State, 50% of the paved road network was deemed in good condition in 2001. As the road system accounts for the vast majority of surface transport in the region, SADC aims to sustain its current successes in this sector and improve upon them as the region develops in the future. In order to maintain roads and road transport as a priority, SADC passed its Protocol on Transport, Communication and Meteorology in 1996.

The Protocol on Transport, Communication and Meteorology

In signing The Protocol on Transport, Communication and Meteorology, Member States agree to assist in developing an adequate road network that supports the socioeconomic growth underway in the region. This network needs to provide access to major centres, ports, and harbours, while minimising road transport costs and impacts to the environment.

In order to craft this network, the Protocol on Transport, Communication and Meteorology requires Member States to collaborate on a harmonised regional road policy that provides for monitoring the effectiveness of road infrastructure, introducing commercial practices for supporting roads, and developing strategies for reducing operating costs.

As assessed in 2001, the road infrastructure in Southern Africa is comparatively strong. Botswana, Lesotho, and Namibia have particularly good road standards; similarly, two-thirds of the road network of South Africa and Zimbabwe remain in good condition. However, road maintenance has been neglected in Angola and Mozambique, where 90% of roads are deemed in fair to poor conditions. Fortunately, Mozambique has recently undertaken a major road rehabilitation programme to increase these conditions.

Yet, certain key locations still maintain missing road links, disabling road transport along vital corridors. These missing links lie predominantly in Angola and the Democratic Republic of Congo – a substantial concern due to these Member States’ large extractive industries that rely heavily on roads to facilitate trade through transport. Although traffic volumes are low, these two Member States need new roads constructed alongside the necessary repairs to damage caused by conflict and neglect.

The cost of road maintenance remains an issue for the region as a whole. While Member States recognise the importance of a functional, integrated road network, funding is often diverted into other sectors. Likewise, significant funds have previously been put into the road network, but were inefficiently managed by governments in many Member States. With traditional top-down approaches to funding for repairs and construction proving ineffective, SADC is currently exploring new systems of funding, including public-private partnerships and user-pays principles. 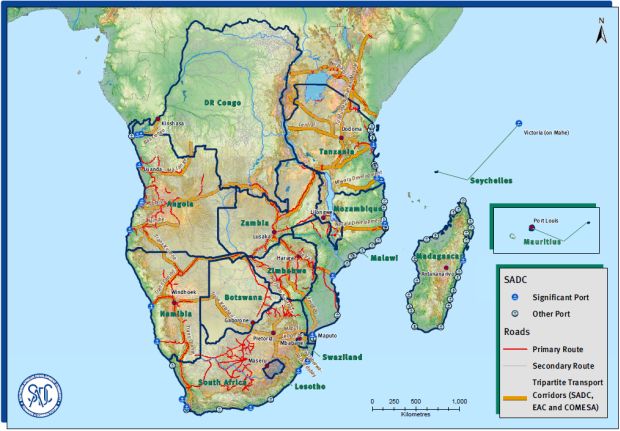 Although current road capacity is sufficient throughout most of the SADC region, projections for 2027 indicate that the network needs expansion. In particular, the Regional Trunk Road Network requires rehabilitation after much overloading and infrequent maintenance.

As described in the 2012 Regional Infrastructure Development Master Plan, SADC has established 72 projects for road infrastructure and transport over the next 25 years, mostly concentrated around the three high-priority corridors that link production points with ports: the North-South Corridor, the Maputo Corridor, and the Dar-es-Salaam Corridor. By 2027, the following road projects are anticipated for operation:

Along with the current network of road infrastructure, these additional road projects should institute a system that connects landlocked Member States with major centres of population and economic activity to ports, while remaining cost effective to operate.

Overseeing these projects, the Association of Southern Africa National Roads Agencies has already succeeded with road network projects. In 2007, it commissioned a study of the Regional Trunk Road Network that incorporated the Democratic Republic of Congo; this study ultimately provided the SADC region with a commonly defined, integrated, and number regional road network, which has been instrumental to future network planning.