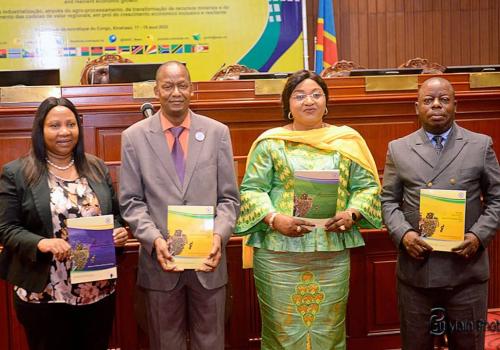 SADC Member States using the Proportional Representation electoral system combined with quotas have a higher representation of women in Parliament, while those using the First Past The Post system produce the least desirable results.

This is one of the key findings of the SADC Gender and Development Monitor 2022 that was launched here in Kinshasa, the Democratic Republic of Congo ahead of the 42nd SADC Summit of Heads of State and Government scheduled for 17-18 August.

In the Proportional Representation (PR) electoral system, often called the list system, citizens vote for a political party rather than a specific candidate, and political parties receive seats proportional to the number of votes won in the voting process.

The closed list is more accommodating of women since it can be prescribed that equal numbers of women and men candidates appear on the list. The list thus adopts what is called a "zebra" approach, alternating the candidates between a woman and a man.

On the other hand, the First Past The Post (FPTP) electoral system, which is the most common in the region and used by nine Member States -- Botswana, Comoros, the DRC, Eswatini, Madagascar, Malawi, Mauritius, Seychelles and Zambia -- citizens cast their vote for a candidate who represents a geographically defined constituency and the candidate with the highest number of votes wins.

According to the SADC Gender and Development Monitor 2022 using official data submitted by member states, Eswatini and Botswana are at the bottom of the SADC regional gender table in 15th and 16th place and have the lowest representation by women in the National Assembly with just 12.2 percent and 11.1 percent respectively.

The other main electoral system used in SADC is the Mixed System which combines aspects of the FPTP and PR electoral systems, and three countries -- Lesotho, Tanzania and Zimbabwe - use this system, which achieves results that are lower than the PR system with quotas, but higher than the FPTP.

Speaking at the launch ceremony of the SADC Gender and Development Monitor 2022, the Minister for Gender, Family and Children in the DRC, Gisèle Luseba said it was critical for countries to create a conducive electoral environment that ensures that more women are elevated into key political and decision-making positions.

"Women make up more than half of the population in the region, but remain under-represented in politics in most SADC Member States," she said.

She said the under-representation of women was due to various challenges including poor electoral systems as well as reluctance by some political parties to promote women.

"Political parties should be at the forefront of pushing gender equality. Even families and the media should encourage girls and women to venture into politics," she said, adding that "investing in women is a good and intelligent decision."

The SADC Executive Secretary, His Excellency Elias Magosi said gender equality in the region is anchored in the Regional Indicative Strategic Development Plan (RISDP 2020-2030) as well as other regional documents such as the SADC Gender and Development Protocol that was revised and amended in 2016.

The SADC Gender and Development Protocol is an instrument for gender equality and women's empowerment in SADC Member States.

"Full participation of women in political and key decision-making positions is an essential condition in democracy and national development," he said.

He said SADC has generally over the years done well in terms of putting in place the legal and policy frameworks as well as the institutions that are necessary to advance towards the attainment of gender equality and women's empowerment.

However, these efforts need to be matched with robust action to implement these measures in order to change the situation on the ground.

The SADC Gender and Development Monitor 2022, which is now in its eighth edition is a result of an extensive research by the Southern African Research and Documentation Centre (SARDC) in collaboration with the SADC Secretariat through the Gender Unit.

Each of the 16 SADC Member States was asked to provide data for women occupying decision-making positions for profiling as a way of ascertaining the current situation as well as bringing out success stories that can motivate others for replication across the region.

The data collected was then validated by the Member States, experts and stakeholders through a validation workshop that was held in June 2022 before the report was approved for publication by the Ministers of Gender and Women Affairs at their meeting in Lilongwe, Malawi.

Other main findings of the SADC Gender and Development Monitor 2022 is that in the Legislature, the representation and participation of women have generally seen a modest improvement over the past 25 years compared to other arms of government.

With respect to women in the Executive, two SADC Member States -- Mozambique and South Africa -- have reached gender parity of 50:50 in Cabinet with an equal number of men and women in the top government leadership positions.

Furthermore, there has been a consistent upward trend in the number of women in Ministerial posts of Cabinet rank in almost all Member States., including key influential ministries such as Defence, Foreign Affairs, and Finance.

Production of the SADC Gender and Development Monitor 2022 was made possible with support from the Austrian Development Agency (ADA), the United Nations Development Programme (UNDP) and the Swiss Agency for Development Cooperation (SDC).

The 42nd SADC Summit of Heads of State and Government, which opens 17 August is running under the theme "Promoting industrialization through, agro-processing, mineral beneficiation, and regional value chains for inclusive and resilient economic growth."

At the summit, President Felix Tshisekedi of DRC will become the SADC Chair, taking over from his Malawian counterpart President Lazarus McCarthy Chakwera. Source sardc.net