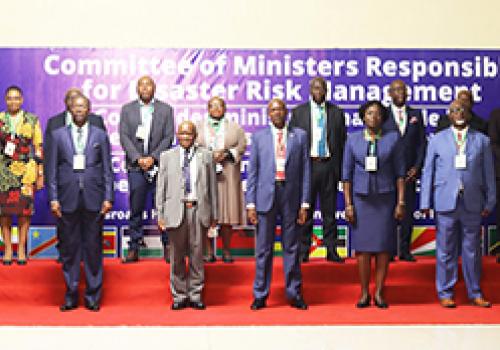 The Ministers Responsible for Disaster Risk Management from the Southern African Development Community (SADC) has expressed concerns at the high prevalence of disasters in the Region, which has necessitated a shift in the regional approach on disaster risk reduction and allocation of significant resources to disaster response and recovery in recent years.

The Ministers also expressed concerns at the recurrence of disasters in the Region at accelerated frequency and severity and stressed the need for heightened vigilance, and proactiveness when dealing with natural disasters, instead of only reacting when disasters occurred.

The Ministers who met in Lilongwe, Malawi, on 19th July 2022 and, reviewed the implementation of SADC programmes aimed at strengthening the Region’s preparedness to disaster risks, and mitigation of the impacts of disasters; as well as enhancing relief efforts and strengthening the Region’s resilience to natural disasters, amongst others. The meeting was held against the backdrop of several disasters in the SADC Region, including droughts, tropical cyclones, torrential rains, floods, wildfires as well as pandemics which continue to batter the Region, causing deaths, service disruptions, and severe damage to infrastructure.

In his opening remarks, Honourable Lobin Lowe, MP, Minister of Agriculture of the Republic of Malawi, and Chairperson of Committee of SADC Ministers Responsible for Disaster Risk Management, highlighted disasters that have devastated the Region, citing cyclones that caused excessive torrential rains and floods that resulted in destruction of infrastructure, loss of lives and livelihoods in Madagascar, Malawi, Mozambique, and South Africa. These tropical cyclones also triggered flooding in Botswana, Malawi, Tanzania, Zambia, and Zimbabwe. He also emphasised the need for SADC to step-up efforts to combat disasters and advocated for Member States’ involvement in mapping the way to improve disaster risk management.

Dr Thembinkosi Mhlongo, SADC Deputy Executive Secretary Responsible for Regional Integration,emphasised the need to improve coordinated efforts to overcome natural and human-made calamities. He said the SADC Region must develop structures and mechanisms at regional level to face these catastrophes as a cohesive front. He noted that the Region was emerging from yet another wave of COVID-19, whose effects worsened over the winter period, highlighting the need for continued vigilance.

Ministers reviewed progress in building the Region's disaster risk financing facility and operationalising the SADC Humanitarian and Emergency Operations Centre in Mozambique, which will coordinate humanitarian and emergency efforts to assist Member States affected by disasters.

Ministers received the 2022 Regional Synthesis Report on the State of Food and Nutrition Security in Southern Africa, and noted the Region's weak macroeconomic performance which contributed to an increase in the number of food insecure people, currently estimated to be 55.7 million for the 2022/23 rainfall season. This is based on 10 Member States that were assessed.

Ministers considered the allocation of additional financial resources to support Member States affected by disasters as well as  strengthen the Regional Vulnerability Assessment and Analysis Programme and National Vulnerability Assessment and Analysis Committees to ensure the collection and analysis of data to determine the levels of vulnerabilities to food insecurity in the Region, while the Disaster Preparedness Fund is being finalised.

On the implementation of the Sendai Framework for Disaster Risk Reduction, and Africa Strategy for DRR Programme of Action (PoA) the Ministers assessed progress made and identified gaps and bottlenecks in the regional efforts to enhance national disaster risk management capacities. In this regard, the Ministers urged Member States to improve timely reporting on the impacts of disasters as they occurred in order to facilitate early action and response. The Ministers also urged the Region to fast-track the implementation of Disaster Risk Management interventions by implementing the provisions of the Sendai Framework for Disaster Risk Reduction, which aims to avoid the generation of new risks, reduce current risks, and enhanced resilience.

The meeting was attended physically and virtually by Ministers or their representatives from 13 Member States, Angola, Botswana, the Democratic Republic of Congo, Eswatini, Lesotho, Madagascar, Malawi, Mozambique, Namibia, South Africa, the United Republic of Tanzania, Zambia and Zimbabwe.