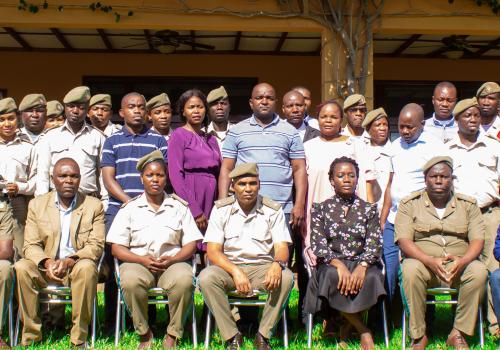 Peace-building programmes should be strengthened at community level to ensure that everybody participates, and the adoption of non-violent conflict resolution, especially the use of human rights approach, is critical to effectively deal with conflicts. This came out of a five-day training workshop for prisons and corrections services held in Pemba, Cabo Delgado Province in the Republic of Mozambique, to capacitate the officers on how to deal with terrorism conflict in the province. The workshop is part of a series of Southern African Development Community (SADC) initiatives aimed at pacifying the security situation in Cabo Delgado Province which continues to be relatively calm but faces the threat posed by terrorist activities.

The overall objective of the capacity building programme is to enhance participants’ knowledge and skills in order to effectively execute correctional duties in the context of the terrorism and violent extremism crimes in Cabo Delgado Province, taking into consideration that some inmates charged for terrorism are admitted in some facilities within the province. The training workshop, conducted from 3rd to 8th July 2022, was attended by 30 corrections officers from various correctional facilities in Cabo Delgado and Manica provinces to enhance their knowledge and skills for effective execution of correctional duties to deal with ongoing terrorism and violent extremism crimes.

A number of topics and modules were covered, among which was the module on Legal Framework, International and Regional Instruments Guiding Corrections Services familiarised  participants on the linkages between the national legal framework and the International and Regional Instruments since most United Nations and African Union Member States have domesticated these instruments into their constitutions. The topics also covered ‘Peacebuilding in Armed Conflict’, ‘Introduction to Violent Extremism-Armed Conflict Dimensions’, Rehabilitation and Reintegration of Prisoners in Armed Conflict Situations and ‘Conflict Resolution Skills’.

A presentation on the role of SAMIM in Mozambique brought to the fore the role being played by SAMIM to bring peace to the troubled province of Cabo Delgado. The participants appreciated the information shared and recommended that more could be done to make the whole community aware of what SAMIM is and its role in Mozambique. They recommended awareness campaigns on radios and use of social media and other platforms to reach out to the population for buy-in and support on the SAMIM efforts in Cabo Delgado. Corrections services should review their policies and guidelines to cater for the need of all inmates, including the new crop of inmates (terrorists); create conditions that prevent radicalisation in prisons but allows rehabilitation of terrorist inmates.

Further to this, the participants recommended the capacity building training for corrections staff should also be extended to officers in other provinces where the terrorists were transferred to so as to prevent radicalisation of other inmates as a pro-active approach. Specialist courses such as on Violent Extremism; Prevention of Radicalisation; Trauma and Stress; and Peacebuilding, including Intelligence Gathering in a Conflict Situation targeting corrections officers need to be urgently carried out in detail as part of capacity building, the participants recommended.

The topics such violent extremism and prevention of radicalisation have to be part of the curriculum for corrections staff from basic induction at the training academy and be adopted by all SADC Member States since the scourge of terrorism is spreading the world over, the participants recommended. Media sensitisation on the role of SAMIM should be carried out as a matter of urgency if the mission is going to have a buy-in and get support from the local population because most of the people in Cabo Delgado province and the rest of country at large do not know what SAMIM is and its role.