The aims and objectives of The African Union, New Partnership for Africa’s Development (NePAD), and the Southern African Development Community (SADC) are closely aligned, with some areas of overlap. As a result, the three structures coordinate their work to allow combined and complimentary efforts.

Following are brief introductions to the African Union and NePAD, before the relationship between both organisations and SADC is explored in Common Objective – Relationship with SADC.

The African Union was officially launched in July 2002, with South African President Thabo Mbeki as its first chairperson. The 53 Member State organisation was carved out of the Organisation of African Unity (OAU), one of the earliest initiatives of inter-regional cooperation in Africa established in Addis Ababa in May 1963. The main intention of the Organisation of African Unity was to promote unity, solidarity, peace, stability, independence and human rights (amongst others) in African States. All African countries (except Morroco) are members of the African Union.

The decision to establish an African Union came about as a result of the continued difficulties of consensus experienced by the OAU member states; this was followed by the adoption of the Constitutive Act of the African Union (2000), which was amended through a Protocol in 2003. Through its constitution, the African Union has the distinct ability to intervene in a countries governance should the need arise.

To learn more, please refer to the website of the African Union.

NePAD is a vision and strategic programme of action intended to support Africa’s development. It is designed with the specific intention to address the challenges of poverty, under-development and marginalisation in Africa. The programme focuses on establishing improved global partnerships and a revised approach to resource mobilisation for the continent. It is considered the mechanism through which efforts for Africa’s development can best be supported and achieved.

The specific objectives of NEPAD are as follows:

From the 1980s onwards, the focus of the Organisation of African Unity (OAU) moved from political liberation to economic development. To realise this new focus, several initiatives were designed to meet the new needs of the region. These initiatives included the Millennium Africa Recovery Plan (MAP) led by then President of South Africa, Thabo Mbeki. The focus of this initiative was on assisting African states to negotiate total debt cancellation from its external creditors to allow the region to start their development plans on a clean slate. The Second initiative was the Omega Plan which, headed by President Wade of Senegal, focused on encouraging countries to invest more heavily in infrastructure, education and training, health and agriculture to realise economic growth and development. The common nature of these plans led to them being combined to form the New African Initiative (NIA), which eventually became the New Partnership for Africa’s Development (NEPAD) in 2001.

The aims and objectives of NePAD, The African Union and SADC are closely aligned, with some areas of overlap. As a result, the three structures coordinate their work to allow combined and complimentary efforts.

As highlighted by the SADC Regional Strategic Indicative Development Plan, the goals and mandates of SADC are closely linked to the mandate of NePAD. Recognising these linkages, the SADC Ministers of Foreign Affairs and Finance Meeting in September 2001 concluded that SADC should be considered a part of NEPAD. The rationale is that NePAD is a framework and plan of the African Union, while SADC is a recognised regional economic community of the same Union. As such, the strengthening and continued success of the implementation of projects within SADC enhances the success of the broader NEPAD framework. To this end, the projects of SADC (through the Regional Strategic Indicative Development Plan) are harmonised with NePAD priorities. SADC participates in NEPAD and the Union. As a result  of the working relationship of SADC and the AU in the area of regional peacekeeping, an African Standby Force has been established. 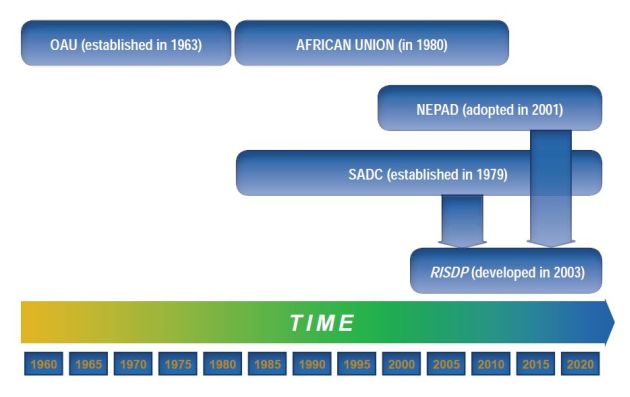