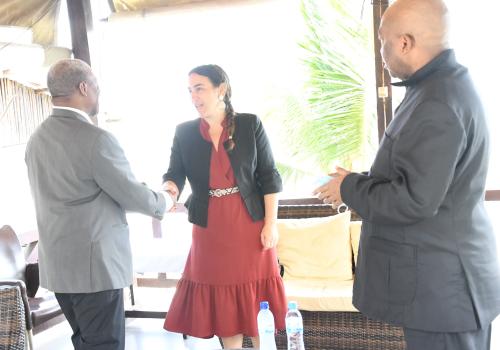 The Southern African Development Community (SADC) Mission in Mozambique (SAMIM) is in the process of transitioning from Scenario Six, whose emphasis was on military operations, to Scenario Five, which is a multidimensional mission combining operations of military, civilian, police and correctional services components being brought to bear on the situation in Cabo Delgado province in northern Mozambique.

Speaking at the presentation of preliminary results of the Early Response Mechanism (ERM) , an initiative of the SADC Peace Building Support to Mozambique funded by the European Union (EU), in Pemba on 12th September 2022, Acting SAMIM Head of Mission, Major-General Xolani Mankayi, said the transitioning will result in the police, correctional service and the civilian components, inclusive of the military, working jointly to restore peace and stability in the province.

He urged everyone involved in peace building efforts in Cabo Delgado to prepare to synchronise operations for the new scenario, continue to fight terrorism and bring back Cabo Delgado Province on a path to peace, socio-economic recovery and prosperity.

Maj-Gen Mankayi said it was unacceptable that the bright prospects for socio-economic development for Cabo Delgado were being constrained by terrorism, resulting in destruction of economic and social infrastructure and loss of productive capacity in the affected areas.  The conflict in the province has resulted in a severe humanitarian crisis impacting all its inhabitants and resulting in the displacement of over 800, 000 innocent people.

He called for all stakeholders to support the Cabo Delgado Reconstruction Plan which outlines strategic actions for re-establishment of public services, infrastructure, and socio-economic recovery of the province. The plan further addresses the re-establishment of population confidence in order to create secure conditions and livelihoods of the population. He noted that there were synergies between the ERM and the reconstruction plan. The ERM capacity building focused on youth entrepreneurship, women empowerment; and capacity building for  the police and correctional  services which were all complementary to the objectives of the Reconstruction Plan. In an effort to bring normalcy back to northern Mozambique, a number of activities have been undertaken by the ERM to provide for humanitarian

The Governor of Cabo Delgado province,  His Excellency Valige Tauabo, hailed the support being provided by SAMIM to curb the terrorism and violent extremism threat in the province.

Governor Tauabo also commended the capacity building for the police, correctional services, women and youths undertaken by ERM as part of peace building mechanisms in the province.  He expressed gratitude to the EU for funding SAMIM’s efforts towards resolving the crisis and a return to normalcy in Cabo Delgado and described the assistance as critical.

Ms Caroline Lopes, Political Counsellor, Delegation of the EU to the Republic of Mozambique who was the EU representative at the function, said her organisation placed high priority to peace and security in the SADC Region hence the support it was rendering to ensure there was a return to normalcy in Mozambique. She said the fight for peace and stability and rebuilding Mozambique was in the EU’s interests. She expressed appreciation to the building of synergies between the police, correctional services, women and the youth as demonstrated by the ERM programme.

ERM programme coordinator in the SADC Secretariat, Mr Kaswamu Katota, outlined the capacity building measures being carried out under the ERM. Correctional officers from various facilities in the province participated in workshops which concluded that peace-building programmes should be strengthened at community level to ensure that everybody participates, and the adoption of non-violent conflict resolution, especially the use of human rights approach, is critical to effectively deal with conflicts.

People internally displaced by the conflict in the province were empowered with skills and knowledge to prevent and combat Gender-Based Violence (GBV), prevention and elimination of traditional harmful practices, and national policies and laws on GBV, among others. On the other hand, police officers from five districts of Cabo Delgado province underwent a five-day capacity building programme. The police officers were trained on issues of human rights in policing; gender and community policing as well as investigation techniques; protection of civilians and sexual exploitation and abuse; and counter terrorism, among others.