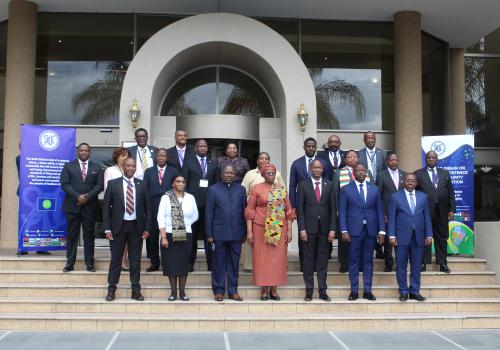 The Southern African Development Community (SADC) Ministerial Committee of the Organ (MCO) on Politics, Defence and Security Cooperation met on 30th November, 2022 in Windhoek, Republic of Namibia and called for concerted efforts to consolidate peace and security to achieve the region’s common aspirations for regional integration, economic development and prosperity of Africa.

Chairperson of the MCO, Honourable Netumbo Nandi-Ndaitwah, Deputy Prime Minister and Minister of International Relations and Cooperation of the Republic of Namibia highlighted that peace and security is the foundation for accomplishing the region’s common vision, SADC Vision 2050 of a peaceful, inclusive, competitive, middle-to-high income industrialised region, where all citizens enjoy sustainable economic well-being, justice and freedom.

She further stated that while the region remains peaceful and stable, pockets of political and security challenges facing some parts of the region threaten to close the economic space for development and incentives for industries to grow and create sustainable jobs, particularly for women and youth.

The Chairperson of the MCO further stated that it is gratifying to note that SADC, as a region, continues to strive towards greater democratic principles, in order to ensure the rule of law and good governance, in line with the Revised SADC Principles and Guidelines Governing Democratic Elections. She cited the successful elections in the Republic of Angola and the Kingdom to Lesotho, in August and October 2022 respectively, as evidence of the region's resolve to promote and entrench peace, stability and democratic values.

For his part, the Executive Secretary of SADC, His Excellency Mr. Elias Magosi underscored the need for the region to remain vigilant against emerging threats to peace, security, and well-being of SADC citizens, by investing in efforts that will reduce the prevalence of political and security challenges.

On the security situation in Mozambique, the Ministers expressed continued regional commitment and solidarity to the Government of Mozambique in the fight against terrorism and violent extremism in the Cabo Delgado Province through the SADC Mission in Mozambique (SAMIM) which was deployed in July, 2021. The Ministers acknowledged the strides made in Cabo Delgado since the deployment of SAMIM, including the improvement of humanitarian and security situation, resulting in the return of Internally Displaced Persons (IDPs) to their areas of origin.

The Ministers paid tribute to the fallen heroes who lost their lives while serving in the SAMIM. Representatives of the Government of Mozambique at the meeting expressed gratitude to SADC for continued support in the fight against terrorism and violent extremism and applauded SAMIM for the improvement of the humanitarian situation through securing and opening corridors for humanitarian relief.

Following the threats posed by the negative forces in the Eastern Democratic Republic of Congo (DRC), the Ministers condemned the upsurge of conflicts and activities of armed groups including the M23, and the foreign aggression support they have received against the DRC. In this regard, the Ministers called for unified measures to complement on-going diplomatic and political peace initiatives to address the tensions and conflict in Eastern DRC, such as the Luanda and Nairobi peace processes facilitated by H.E. João Manuel Gonçalves Lourenço, President of the Republic of Angola and H.E. Uhuru Kenyatta, former President of the Republic of Kenya respectively.

SADC, as a co-Guarantor institution to the Peace, Security and Cooperation Framework Agreement to the DRC and the Great Lakes Region, remains seized with the security situation in the DRC through the deployment of the Force Intervention Brigade (FIB), operating under the mandate of the United Nations Organisation Stabilisation Mission in the DRC (MONUSCO) since 2013. To this end, the Ministers reaffirmed their commitment to continue to work with the United Nations in support of DRC as part of SADC efforts towards the maintenance of peace and security in the Region.

In an effort to strengthen the SADC Mediation and Preventive Diplomacy Structure of the Panel of Elders, the Ministers endorsed the proposal for the Panel of Elders to be composed only of individuals who are former Heads of State or Government with the view to increase prospects of success in regional efforts to prevent and resolve significant intra-state and inter-state conflict during high-level political engagements with leaders.

The SADC Ministerial Committee of the Organ reports to the Organ Troika and it is charged with the responsibility of coordinating the work and structures of the Organ in line with Article 5 of the SADC Protocol on Politics, Defence and Security Cooperation.