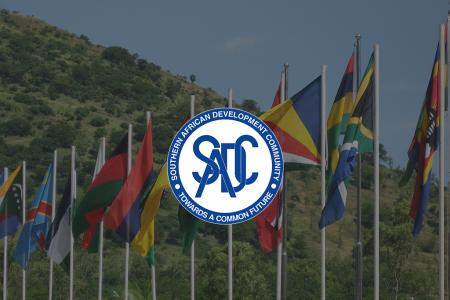 What is the SADC IICB?

The Integrated Institutional Capacity Building (IICB) Programme is intended to implement capacity building under the SADC sub-regional envelope in line with the 11th European Development Fund (EDF) Regional Indicative Programme for Eastern Africa, Southern Africa and Indian Ocean (2014-2020) Regions. The overall aim of the Programme is to accelerate progress towards the implementation of the SADC regional integration agenda in compliance with the SADC Treaty.

Against this background, SADC Secretariat is implementing the IICB whose objective is primarily aimed at accelerating progress towards the implementation of the SADC regional integration agenda  through the strengthening of SADC secretariat capacity and Member State structures under two specific objectives:

Specific Objective 1 (SO1): To enhance the capacity of SADC Member State structures to facilitate and co-ordinate implementation of the regional agenda at country level; and

Specific Objective 2 (SO2): To enhance service delivery by the SADC Secretariat in support of programme/projects planning, co-ordination, resource mobilisation, implementation, monitoring and knowledge-sharing of regional commitments at country level.

To ensure effective implementation and delivery, SO1 and SO2 have separate implementation arrangements but are coordinated in a way that ensures complementarity. SO1 is co-financed by the Government of the Federal Republic of Germany through the German Federal Ministry for Economic Cooperation and Development (BMZ).  The Deutsche Gesellschaft für Internationale Zusammenarbeit GmbH (GIZ) was identified by EU, SADC and BMZ as  the lead implementing agency for SO1 also known as the Strengthening National Regional Linkages Programme (SNRL) co-financed under a Pillar-assessed Delegation Agreement (PAGoDA2). SO1 focuses on capacity development of SADC Member States coordination structures to address issues of weak institutional linkages at the Member States level with a thematic emphasis on SADC instruments in the areas of agriculture, industrialisation and infrastructure development as identified in the Revised RISDP.

SO2 is implemented directly by the Secretariat with a focus on complementary activities to strengthen the capacities of the SADC Secretariat and its affiliated regional structures.

Who is eligible for support and what actions will be supported under IICB?

In addition to capacity support to internal Secretariat Directorates and Units under SO 2, the Programme has been supporting ten SADC Member States under SO 1 have benefitted directly through awareness and targeted interventions on strengthening national and sectoral structures after being assisted to implement priority protocols. These are Botswana, Democratic Republic of Congo, Eswatini, Lesotho, Malawi, Mauritius, Mozambique, Namibia, United Republic of Tanzania and Zambia, have been assisted to implement priority protocols.

How is IICB financed?

The total Programme budget is €19.5 million, out of which €14m is from the European Union and €5.5 million is co-financing from the Government of the Federal Republic of Germany. The programme will run between 2019 and 2023.

What are the Key Result Areas of the IICB?

Among the key results for the IICB under SO 1 include

Participating Member States have functional national level structures and clear operational plans for regional-national linkages. This includes having national development strategies and plans aligned with regional priorities by 2021. To support the implementation of the regional agenda, SO 1 is working towards Member States implementing resource mobilisation plans with at least 50% of resources needed are mobilised through resource mobilisation plans.

Under SO 1, the IICB Programme works to promote positive change in the Secretariat’s way of doing business that will see a transformed way of doing business in the SADC Secretariat making the institution more agile to change based on a culture of interaction, collaboration and adaptation. Through facilitating better structured and systematic collaboration among SADC Secretariat departments the Programme seeks to see increased efficiency and effectiveness in the execution of the Secretariats’ mandate as well as strengthened engagement mechanisms with regional stakeholders who play a key role in regional integration.

When will IICB be operational?

Under the IICB, SADC has already begun piloting projects in partnership with GIZ in an effort to strengthen national and regional linkages towards achieving regional integration objectives.

Alignment between regional and national levels within the context of sustainable aquaculture development is being piloted in Botswana, Malawi and Namibia. The pilot project has resulted in the development of aligned strategies, as well as many other interventions and support to national processes aimed to strengthen implementation of the protocol in the respective countries. Further, the three pilot countries are on a path to developing sustainable aquaculture value chains, as spelled out in the aligned national aquaculture strategies.

In addition, the project produced policy briefs and communication products such as success stories and factsheets, which have been handed to the respective countries’ Ministries Responsible for Fisheries and Aquaculture. The communication products will be used to raise awareness to different target groups including policy makers, fishermen and women, media, and the broader women and youths on the benefits of aquaculture and how SADC can continue the national processes in supporting fisheries and aquaculture development for the benefit of all citizens. The lessons learnt and success stories from the pilot project were also shared with the participating Member States, and these will be used to facilitate replication of the initiative in other SADC Member States.

Agriculture is among the priority sectors considered important to the socio-economic development of citizens in the SADC Region. By investing in agriculture, SADC Member States are able to leverage the benefits of regional agriculture and agro-processing value chains, access to international markets and pool resources to achieve economies of scale.