Southern African governments commit to use of new approach for food, water and energy security 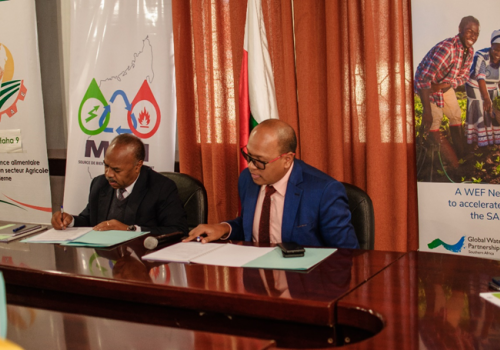 Governments in the Southern Africa Development Community (SADC) Region have committed to creating an enabling environment that will drive cross-sectoral engagement and implement integrated investment projects in the three sectors, to enhance water, food and energy security in Southern Africa.

The commitments were made during the Water, Energy and Food -WEF Nexus national dialogues whose objective is to identify priorities and share experience on how improved sectoral coordination can accelerate national investment opportunities. The dialogues have so far been conducted in nine countries
across the SADC Region.

The national dialogues are organised in hybrid format with in-person and virtual participation, under the SADC- WEF Nexus Dialogue Project called & quot; Fostering Water, Energy and Food Security Nexus Dialogue and Multi-Sector Investment in the SADC Region: Phase II & quot;. The Project is funded by the European Union and is implemented by Global Water Partnership Southern Africa (GWPSA) on behalf of SADC.

The SADC Secretariat has since commended the Member States on their commitments to using an integrated approach in resolving challenges in the three WEF sectors.

The SADC Directorate of Infrastructure has commended Member States for supporting WEF Nexus engagements demonstrated through the involvement of Senior Officials in the project. The national dialogues brought together representatives from Ministries of Water, Energy and Agriculture, NGOs, academia and other development partners.

“The project’s overall objective is to ensure that the Region respond to the increasing demand for water, energy, and food security by developing an integrated nexus approach in view of climate change in the SADC region. We hope to create an enabling environment that will drive cross-sectoral engagement and implement nexus investment projects that enhance water, food, and energy security in the SADC region,” said Dr. Kabeya Senior Programme Officer in SADC’s Water Division.

There is ongoing formulation of Technical working groups at country level to encourage continuous multi- stakeholder engagement towards the WEF Nexus agenda. “SADC is committed to work with implementing partners and member states through these technical working groups to ensure that efforts are made to mobilise resources and address bottlenecks encountered during implementation of nexus projects,” added Dr. Kabeya.

The dialogues have so far been held in Lesotho, Zambia, Malawi, Democratic Republic of Congo, United Republic of Tanzania, Madagascar, Seychelles, Angola and Zimbabwe. The remaining countries in SADC will hold WEF Nexus Dialogues within the year. “The SADC WEF Nexus Project is being implemented in two phases. The first phase commenced in 2017 and ran up to 2020, which saw the development and adoption of SADC governance framework and a WEF Nexus screening tool,” said Mrs Shamiso Kumbirai- Mlilwana, GWPSA SDG Water Investments Specialist.

The project is currently in Phase II which aims to institutionalize WEF Nexus and accelerate WEF nexus investments to enable transformation that will address water, energy, and food security in the SADC region, in a changing climate. Under this phase, interventions are aimed at increasing application of the Nexus approach in planning, policymaking and implementation and increase interest from the public and private investors for projects applying the Nexus approach.

The National Dialogues have so far helped SADC Member States to identify some key challenges that hinder the implementation of an integrated WEF approach including inadequate funding and incapacitated governance structures that limit private sector involvement in investment planning in the three sectors.

Senior Programme Officer in SADC’s Directorate of Food Agriculture and Natural Resources, Mr Duncan David Samikwa |said that the dialogues have also identified potential national WEF Nexus projects that are going to form part of the project pipeline for further project preparation support in the strengthening of the WEF nexus approach. These key outcomes from the dialogues will feed into the development of regional instruments to guide WEF Nexus planning, adoption and investment planning in the SADC region.