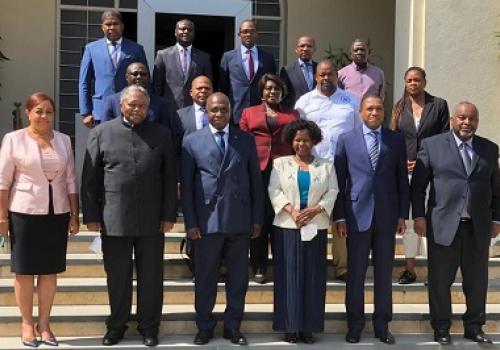 This was underscored by Ambassador Téte António, Minister of External Relations, Republic of Angola, during a courtesy call on the Ministry by members of the SADC Electoral Advisory Council (SEAC) on 9th March 2022. The SEAC is in Luanda, Republic of Angola on a post-election goodwill mission to follow-up on the implementation of the SEOM recommendations arising from the general elections held in August 2017.

The Minister also highlighted key legislative developments with respect to the conduct of elections in Angola, hailing in particular, the historical decision to facilitate voting by Angolans in the diaspora, adding that voter registration and voting by such citizens will be facilitated through Angola's diplomatic infrastructure abroad.

Speaking on behalf of the SADC Executive Secretary, the Director of the Organ on Politics, Defense and Security Affairs, Mr. Jorge C. Cardoso, expressed the delegation's appreciation for the assistance rendered in facilitating consultations with various electoral stakeholders in Angola.

The SEAC delegation is led by Advocate Thoahlane Leshele, the SEAC Member from the Kingdom of Lesotho, and Advocate Orlanda Rafael Duarte, the SEAC Member from the Republic of Mozambique. Adv. Leshele noted that besides reviewing the 2017 elections, the mission was also in the country to assess the level of preparedness for Angola to conduct the forthcoming elections to be held in August 2022. The mission assured the Government that they had taken note of issues raised by all stakeholders which included political parties, civil society organisations and media institutions, these issues will be part of a Report to be submitted to the Chairperson of the Organ.

To date, the mission has held consultations with the following stakeholders; Union for the Total Independence of Angola (UNITA), the Broad Convergence for the Salvation of Angola (CASA-CE) Coalition, Forum of Angolan Non-Governmental Organisations (FONGA), National Patriotic Alliance (APN),Media Institute of Southern Africa (MISA), Angola Chapter, National Liberation Front of Angola (FNLA), Social Renewal Party (PRS), Deputy Attorney General of the Republic of Angola, and SADC Ambassadors and High Commissioners Accredited to the Republic of Angola UN Resident Coordinator in Angola and the European Union Delegation.

It is expected that SADC will field another mission essentially focusing on the country's readiness to hold elections in August 2022 ahead of a decision to deploy the SEOM in accordance with the SADC Principles and Guidelines Governing Democratic Elections (2015).