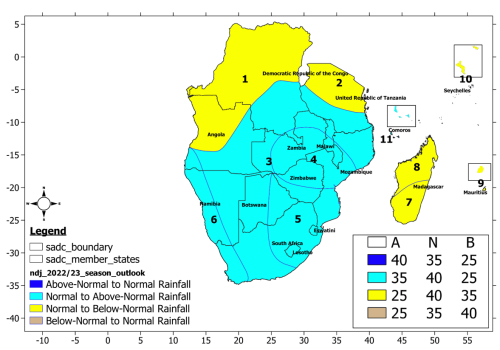 The bulk of the Southern African Development Community (SADC) Region is likely to receive normal to above-normal rainfall for the period October-November-December (OND) 2022 and January-February-March (JFM) 2023, regional weather and climate experts have predicted.

In a statement read at the end of the 26th annual Southern Africa Climate Outlook Forum (SARCOF 26) hosted virtually by the SADC Climate Services Centre (CSC), with support from Member States and funding from the European Union (EU) through the Intra-ACP Climate Services and related Applications project, the experts forecast that the bulk of the SADC Region is likely to receive good rainfall during the next agricultural season.

There was, however, consensus during the meeting that national meteorological services in SADC Member States should work on their own detailed forecasts so as to capture the actual forecast for their own countries. Users of the forecast were strongly advised to contact their National Meteorological and Hydrological Services (NMHS) for interpretation of the Outlook, additional guidance and updates.

The JFM period is expected to receive normal to above normal rains in most of the SADC Region, except for northern Angola, bulk of the DRC, northern half of United Republic of Tanzania and the bulk of Madagascar.

The climate experts took into account oceanic and atmospheric factors that influence the climate over the SADC Region, including the El Nino Southern Oscillation (ENSO) which is currently in a La Nina phase. La Niña is defined by cooler than average sea surface temperatures in the central-eastern equatorial Pacific Ocean and related atmospheric changes, and is normally associated with normal to above normal rains in the Southern African Region. The ENSO is expected to remain in a La Nina phase during the forecast period.

This year, the SADC Secretariat, through the CSC, convened the three-day SARCOF 26 virtual workshop which ran from 24th – 26th August 2022 under the theme “Early warning and early action: SADC Region preparedness towards a ‘ready-set-go!’ approach”. This theme is based on seasonal guidance that can enable regional agencies and other stakeholders to mobilise resources across the Region. At the same time local actors may get “set” and begin their initial preparations. Much closer to the time of the climate impact, appropriate actions will be taken directly and this reflects the “go!” phase.