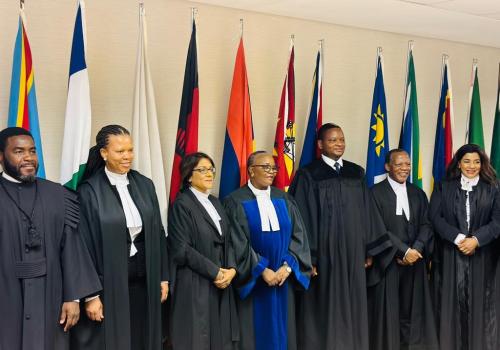 The Southern African Development Community Administrative Tribunal (SADCAT) has sworn in six (6) new judges in fulfilment of SADCAT Statute, under Article V, stipulating that the Tribunal shall comprise seven (7) judges.

The Swearing in ceremony was conducted at  an extra-ordinary session held on 18 November, 2022 at the SADCAT chambers in Gaborone, Botswana and presided over by the Honourable Justice Dr. Sanji Mmasenono Monageng who is the President of the SADCAT.

In presiding over the Swearing-in ceremony, Dr. Monageng expressed her profound gratitude to the retiring SADCAT judges who have served the institution with professionalism, dedication and judicial expertise.

The newly sworn in judges of SADCAT were  appointed by the SADC Council of Ministers during its meeting held in August 2022 in Kinshasa, Democratic Republic of Congo.

The new judges are as follows;

Judge Adelino Fernando Muhongo from the Republic of Angola

Judge Mumcy Mju Dlamini from the Kingdom of Eswatini

Judge Albano Macie from the Republic of Mozambique

Judge Latifa Mansoor from the United Republic of Tanzania

Judge Rodgers Foroma Manyangadze from the Republic of Zimbabwe.

SADCAT was established by a Resolution of the SADC Summit meeting held in Gaborone, Republic of Botswana, on 18 August 2015 pursuant to Article 9(2) and 10(6) of the SADC Treaty. SADCAT has jurisdiction to hear and determine labour disputes between SADC Secretariat or any of its institutions, as an employer, and an employee. This includes a dispute relating to the contract of employment of a staff or to the terms of appointment of such staff member.  The Tribunal is headed by an elected Judge-President and Vice-President who are assisted by a Secretariat.