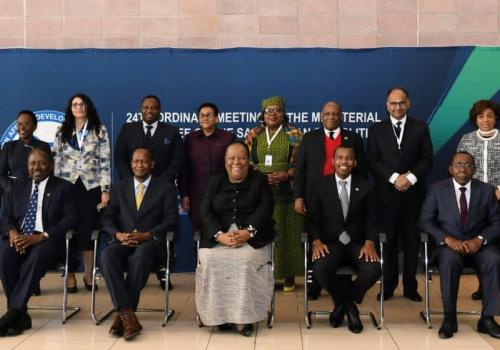 The Southern African Development Community (SADC) Ministerial Committee of the Organ (MCO) on Politics, Defence and Security Cooperation has reiterated the region’s commitment to bolster peace, security, stability, integration and development. The commitment was expressed during the 24th Ordinary Meeting of the MCO held on 19th July, 2022 in Pretoria, South Africa which adopted a number of strategic decisions and actions aimed at mitigating emerging threats to peace, security and stability in the SADC region.

Honourable Dr. Naledi Pandor, Minister of International Relations and Cooperation of the Republic of South Africa, and Chairperson of the MCO commended Member States for remaining steadfast in enhancing peace and security, which are the foundation for the realisation of the SADC Vision 2050 of a peaceful, inclusive, competitive, middle–to-high income industrialised region, where all citizens enjoy sustainable economic well-being, justice and freedom.

Honourable Dr. Pandor called for concerted efforts to address emerging national, regional and global challenges that threaten peace, security and stability of the SADC region. To this end, the MCO Chairperson urged Member States to accelerate implementation of the relevant provisions of the SADC strategies, policy and legal instruments. The Executive Secretary of SADC, His Excellency Elias Mpedi Magosi, highlighted that, while the region remains peaceful and stable, SADC remains seized with pockets of security challenges facing some Member States.

H.E. Magosi said prevention and peaceful resolution of conflicts remains the most sustainable method for enhancing peace and security in the Region. On this note, the SADC Executive Secretary urged Member States to make efficient use of and benefit from the wisdom derived from the SADC Mediation, Conflict Prevention and Preventative Diplomacy Structure, led by H.E. Dr. Jakaya Mrisho Kikwete, former President of the United Republic of Tanzania in his capacity as the Chairperson of the Panel of Elders (PoE).

During the meeting, the MCO urged Member States to implement the Integrated Strategy to Prevent and Combat Transnational Organised Crime in the SADC region and its Action Plan which provides a framework for addressing, among others, Transnational Organised Crimes. In this regard, the MCO approved the establishment of a Regional Task Force comprising representatives from Member States to coordinate the implementation of the Strategy.

In response to the current threat of terrorism in the region, the MCO endorsed the revised Regional Counter Terrorism Strategy and its Plan of Action for the period 2021-2025, and urged Member States to expedite the development of National Counter Terrorism Strategies, recognising that preventing and combatting terrorism is key to national and regional peace and security.

In recognition of the important role of Non-State Actors (NSAs) in the implementation of the SADC Regional integration agenda, the MCO approved the Mechanism for Engagement between SADC structures and NSAs. Following the approval of the Mechanism, the MCO directed the Secretariat to finalise the guidelines for accrediting NSAs for engagement with SADC taking into account the provisions and context of the SADC Regional Indicative Strategy Development Plan (RISDP) 2020-2030 and SADC Vision 2050.

The MCO wished the Republic of Angola and the Kingdom of Lesotho peaceful elections as the two Member States will be holding General Elections in August 2022, and October 2022 respectively. In this regard, the MCO noted that, in accordance with the SADC Principles and Guidelines Governing Democratic Elections (2015), SADC will deploy its Electoral Observation Mission to promote the holding and observation of democratic elections.

Noting that more than 80% of international trade in goods is conducted through the seas, the MCO approved the SADC Integrated Maritime Security Strategy (IMSS) and Action Plan, which highlights the significance of SADC regional maritime security through strengthening maritime governance, ensuring a safe and secure maritime domain, environmental management and optimising the SADC maritime economy.

The MCO reiterated the region’s unwavering commitment to supporting the Republic of Mozambique in the fight against terrorism and acts of violent extremism through enhancement of the operational capacity and effectiveness of the SADC Mission in Mozambique (SAMIM).

The MCO urged Member States that have not ratified the SADC Protocol on the Facilitation of the Movement of Persons to do so for it to come into force, while noting that critical aspects of the Protocol are being implemented including; conclusion of VISA exemptions between Member States, 90 days VISA waiver; bilateral Agreements to harmonise Border Working Hours; and enshrinement of Right of Establishment and Residence in National Laws.

The MCO endorsed the assessment Report on the risks, threats, implications and opportunities of the on-going conflict in Europe for the SADC region and recommended to the SADC Council of Ministers to consider, amongst others, encouraging investment in commercial food production and energy industries to reduce dependency from outside the region and enhance local production, self-sufficiency and export capacity.

In line with Article 5 of the SADC Protocol on Politics, Defence and Security Cooperation, the MCO coordinates the work of the Organ and its structures and comprises Ministers responsible for Foreign Affairs, Defence, Public Security and State Security in the SADC Member States.