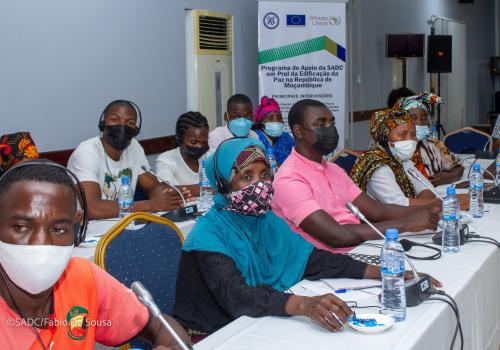 People who have been internally displaced by conflict in Cabo Delgado, Republic of Mozambique, have been empowered with skills and knowledge to prevent and combat Gender-Based Violence (GBV), prevention and elimination of traditional harmful practices, and national policies and laws on GBV, among others. This follows the training of IDPs which the Southern African Development Community (SADC) conducted in Cabo Delgado province under the Early Response Mechanism (ERM) project from 27th June to 1st July 2022 in Pemba, with participants drawn from various affected districts of the province.

Following the deployment of SADC Mission in Mozambique (SAMIM) and relative peace in the province, there are now activities being undertaken through the SADC Peacebuilding Support to the Republic of Mozambique. The training of IDPs is part of these activities meant to provide for humanitarian assistance and multidimensional peacekeeping which entails, among others, the involvement of civilians to undertake confidence building measures/programmes, aimed at addressing mistrust within the communities.

The training of IDPs was attended by 30 participants drawn from Ancuabe, Ingonane, Macomia, Mocimba da Praia, Muidumbe, Nangade, Palma, Pemba and Quissanga districts. The training programme covered Gender Roles and Stereotyping; Value Clarifications and Cultural Practices; Gender Mainstreaming and its Importance; and International, Regional and National Commitments on Gender Equality. The training also looked at the general situation of women in Cabo Delgado Province; gender inequality in agriculture, education, and health; government policies and laws on gender; and achieving balanced participation of women and men in public decision-making.

Participants were taught how to prevent and combat Gender-Based Violence (GBV) in the community; forms of GBV; prevention and elimination of traditional harmful practices like child marriages; management of survivors of Sexual and Gender-Based Violence (SGBV); national policies and laws on GBV; referral mechanisms on GBV; and services and reporting on GBV.  The training also covered social inclusion of marginalised groups like children, the aged and persons with disabilities; and the impact of the Mozambican conflict on women and girls. Deliberations were interactive and participants expressed gratitude for the new information acquired through the workshops especially of knowing their rights.  They were happy that they understood what constituted SGBV and how to prevent and respond when it occurs.

Participants gave personal testimonies on what happens within their communities and how their lives were affected by some of the issues that were discussed during the sessions. Others shared personal experiences of how they suffered from SGBV and felt that they could have helped survivors in their communities better if they had the information acquired during the workshop.  It was recommended that the trainings be sustained and that these should be done in districts when the situation is calm so more participants could attend, and that SAMIM should engage United Nations agencies and other key stakeholders operating in Cabo Delgado to help with the establishment of one-stop centres to attend to survivors of GBV.

There is a need to conduct training on anti-corruption; help communities, especially women, with income generating activities through skills development initiatives to alleviate poverty as this will also act as a mechanism to prevent GBV. It was also recommended that there be an improvement in access to services water, sanitation and hygiene, health, education, infrastructure and shelter for escapees and survivors of GBV. There is a need to sensitise host communities on the need to live in harmony with IDPs and stop calling them names, shaming them and accusing them of being wives to terrorists.

The SADC Peacebuilding Support to the Republic of Mozambique is providing support, in collaboration with humanitarian agencies, to continue providing humanitarian relief/assistance to the population affected by the terrorist activities, including the IDPs coordination mechanisms.  The peace building support initiative will mainstream in all its activities cross-cutting issues such as the promotion of human rights, gender equality, democracy, good governance, children’s rights, the rights of indigenous peoples and environmental sustainability.