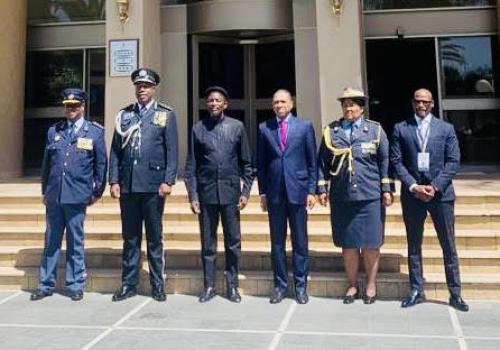 The Chiefs of the Police Sub-Committee/Southern African Regional Police Chiefs Cooperation Organisation (SARPCCO) of the Inter-State Defence and Security Committee (ISDSC) met in Windhoek, Namibia, on 3rd November 2022 to consider a Report on the Status of Transnational Organised Crime (TOC) in the Southern African Development Community (SADC) Region.

The Extraordinary Meeting was hybrid, with some Member States attending virtually and some physically. In a keynote address which was read on his behalf by his deputy, Honourable Daniel Kashikola, the Guest of Honour, the Namibia Minister of Immigration, Home Affairs, Safety and Security, Honourable Dr. Albert Kawana, applauded Police Chiefs/SARPCCO for making significant headways towards strengthening cooperation, and fostering joint strategies for the management of all forms of cross-border and related crimes with regional implications. He said that cooperation and joint engagements, provide the necessary ingredients for the growth of a knowledge base that facilitates the formulation and development of effective interventions to combat cross-border crimes.

In his welcoming speech read  by the Deputy Inspector General of the Namibian Police Force, Major General Anna-Marie Nainda,  the Chairperson of SARPCCO and Inspector General of Namibian Police Force, Lieutenant General Joseph Shimweelao Shikongo, appealed to  the Chiefs of Police/SARPCCO to continue forging and nurturing unity of purpose in order to collectively overcome several challenges littering the policing terrain as well as  supporting initiatives and efforts  aimed at making SARPCCO effective and relevant  in the face of the ever-mutating  world.

The Director of the Organ on Politics, Defence and Security Affairs (at the SADC Secretariat, Mr Jorge Cardoso highlighted the need for the Chiefs of Police/ SARPPCO to be action oriented, focusing on concerted efforts to curb the ever increasing TOC in the Region. He congratulated the Region, Namibia and Maj. Gen.  Nainda, in particular, for being nominated as the Delegate for Africa in the International Police Organisation (Interpol) Executive Committee.

During their meeting, the Chiefs of Police/SARPCCO discussed the draft Threat Assessment Report on the Status of TOC in the SADC Region which highlighted that:

The meeting noted with grave concern that the Region is losing billions of United States dollars annually due to the illicit economy and underhand dealings orchestrated by transnational organised criminal syndicates and their network of supporters Even more worrisome is the growing nexus between terrorism and organised crime wherein the proceeds of organised crime are used for financing terrorist activities.

The Chiefs of Police expressed concern about other TOCs such as illicit proliferation of small arms and light weapons, terrorism, drug trafficking, trafficking in persons and smuggling of migrants, cash in transit heists, theft of motor vehicles, illegal artisanal mining, smuggling of goods, and money laundering, among others.

The meeting agreed to double up efforts aimed at protecting the critical infrastructure from theft and vandalism and made several recommendations to enhance the SADC Region’s capacity to effectively prevent and combat TOC.

In his closing remarks, the Chairperson of SARPCCO, Lt-Gen. Shikongo reiterated the need for cooperation and effective implementation of resolutions.

“International police cooperation is a work in progress that never ends. The resolutions we have passed here must now be translated into action and, I thus, call upon all of us police chiefs to give strict instructions to our officials in our respective countries to ensure a full implementation of our resolutions.  Only then, SADC and the global community of law enforcers will be able to overcome the challenges of complexities in this interdependent world,” he said.