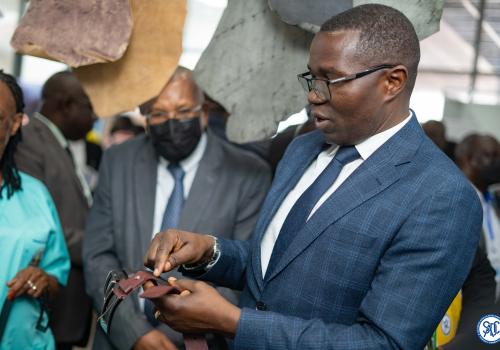 There is an improvement in the Southern African Development Community (SADC) intra-trade which has risen to 23%, up from 19% in 2021, according to the latest African Union (AU)  Regional Integration Report (2021).

This improvement reflects the impact of ongoing efforts to roll out various provisions of the SADC Protocol on Trade, including the implementation of simplified trading arrangements that have enabled an increase in informal cross-border trade covering both  agricultural and non-agricultural commodities.

The Secretariat continues to monitor the progress on SADC levels of industrialisation and intra-trade to ensure regional economic diversification. Several activities and intermediate outputs have been achieved, but little change has been noted in impact indicators. The share of manufacturing value added (MVA) in Gross Domestic Product (GDP) is still below 12 percent compared to a target of 30 percent by 2030 and 40 percent by 2050. Most SADC Member states still depend on agro-based and mining commodities in terms of contribution to GDP.

The Region is developing a regional framework and programme to improve the diversification and restructuring of the SADC industrial base. A SADC is also undertaking several activities in support of developing value chains that can improve its industrialisation base and productivity and enhance the Region's participation in global value chains. This is being done in the context of the Region's identified six priority areas where the value chains can be established and for which regional strategies should be developed. The six priority areas are agro-processing, minerals beneficiation, pharmaceuticals, consumer goods, capital goods, and services.

In the same vein, the Regional Detailed Mapping and Analysis of the Cotton, Rice, Soya and Wheat Value Chains, with the primary objective of identifying opportunities for the upgrading of the value chains resulting in increased regional production and intra-regional trade, is being undertaken.

The economies of SADC Member States are at different stages of development, and, as a result, the state of industry varies widely throughout the Region. In many member states, agriculture plays a significant role in the economy, employing almost half of the Region's population. However, much of this agriculture is subsistent rather than large-scale high-value crops. Mining employs just 5 percent of the population but contributes 60 percent to the foreign exchange earnings and 10 percent of the GDP for the SADC Region.

Despite all of these challenges the Region faces, especially the predominance of the primary sector in its economy, there are reasons to believe diversification is attainable. It is being given priority along with other objectives currently shaping the industrial policy direction of most, if not yet all, the SADC Member States; and the Enhancing the Quality of Industrial Policies' (EQuIP) Methodology to design industrial policies and diagnose industries equips them with the technical aspects of industrial policy design and diagnosis taking into account the priority areas and regional short-term and long-term goals – as indicated by the SADC Industrialisation Strategy and Roadmap (2015-2063).

Through the industrialisation strategy, SADC has a better chance to improve the business environment for merchandise and services trade, attracting new and productive private investment. This will likely require significant improvements in the infrastructure and processes that facilitate international trade and reforms in key input sectors, such as energy and information communication technologies (ICT).

Economic diversification can be explored to diversify the sectors, namely GDP diversification, export diversification and fiscal diversification. A selection of one of these aspects over others depends on a country's structural characteristics – including but not limited to resource endowment, institutional capacity and/or human capital.

Export diversification enables countries to move away from exporting low-value primary goods to exporting value-added products. At times the newly forged trade relationships and a diversified export base allow countries to partake in global value chains. In turn, a country can take advantage of forward linkages – domestic value-added exports of a country going into the exports of other countries – and backward linkages (the opposite of the former). This way, its international trade competitiveness improves, and domestic firms gain a competitive edge in global trade from technology transfers.

The third aspect involves diversifying a country's revenue sources and targets of public expenditures. It is linked to the success or failure of the other two aspects in that if economic diversification happens, diversified revenue is generated to fund further industry development and other public services.

Regarding the rest of the challenges, the African Continental Free Trade Agreement (AfCFTA) affords SADC countries preferential access to the recently established continental market as a direct export destination and access to the inputs and skills needed to compete internationally.

However, even though SADC needs to continue diversifying its economic base away from agriculture through further expanding the services and manufacturing sectors, it will require increased investment into these sectors and the infrastructure needed to compete globally in the merchandise and services trade.