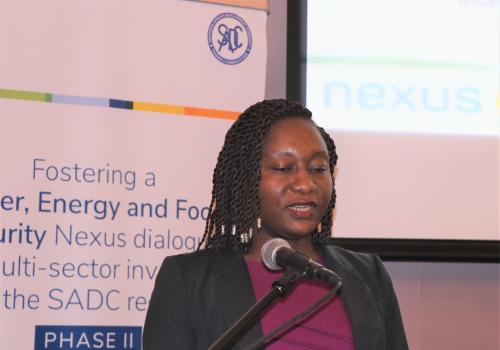 Southern Africa Development Community Member States have embraced the integrated planning and implementation of projects in the water, energy and food (WEF) sectors, with 14 holding national dialogues where they identified priority investment projects that could be taken further for bankability and mobilising financing for Implementation.

This came to light during a WEF Nexus Session on investment planning which was organised by the Global Water Partnership Southern Africa (GWPSA) at the just ended Waternet Symposium which ran from 19th-21st October 2022 at Sun City Resort, South Africa.

Making a presentation during the session, GWPSA’s Programme Officer, Annah Ndeketeya, highlighted WEF Nexus projects that are currently being undertaken in the Region, including the development of a regional project which is meant to strengthen regional collaboration for integrated source to sea management to sustainably develop the Region where three countries, namely Eswatini, Mozambique and South Africa are currently applying for funding from the Global Environment Facility for its implementation.

With technical support of SADC’s Nexus Regional Dialogues Programme, Lesotho and South Africa are developing funding concept notes for a Climate Resilience Project worth US$20 million and  US$25 million respectively, to address land degradation and reduce the effects of climate change on agriculture. Both concept notes are going to be submitted to the Green Climate Fund.

“The progress that is being registered at both national and regional levels in the implementation of WEF Nexus projects is impressive. The goal is to leverage US$50-60 million in investment to strengthen the application of the WEF Nexus approach within the SADC Region,” said Ms. Ndeketeya.

In his keynote presentation, Professor Tafadzwanashe Mabhaudhi from the International Water Management Institute and also a professor at the University of KwaZulu-Natal, commended the political will being demonstrated by SADC Member States, indicating that it was encouraging that only two nations were yet to hold national dialogues.

He, however, advised stakeholders to address the gaps that have been identified at national level to ensure that the WEF Nexus approach is scaled up to implementation and not just a theoretical conversation.

“Lack of legally binding and practical coordination mechanisms result in an ineffective governance system that would not give autonomy and mandate to established structures to pursue the nexus agenda. The Water Energy-Food (WEF) is critical in overcoming governance issues in dealing with complex and interconnected resource management challenges. Domesticating the WEF at the national level is critical to ensure that water, food, energy security and ecosystem resilience are achieved in the Region,” said Professor Mabhaudhi.

To demonstrate the benefits of the WEF Nexus approach, participants had the opportunity to learn from Malawi and Zambia which are implementing demonstration community projects on solar powered irrigation systems as part of the Global Climate Change Alliance Plus (GCCA+) project. SADC’s Regional Nexus project is providing technical support to the implementation of these projects in Malawi and Zambia and is now looking at developing funding proposals to scale up these demonstration projects to national level. The GCCA+ programme is funded by the European Union (EU) through the SADC Secretariat. It is implemented together with national, regional and international key stakeholders together with rural electrification agencies, developers, and Non-Governmental Organisations (NGOs), GWPSA and Centre for Coordination of Agricultural Research and Development for Southern Africa (CCARDESA), among others

Another example was an initiative called Water and Energy for Food (WE4F) being implemented around the world, including in Africa, where innovators in the three sectors are being supported to implement integrated projects.

“WE4F is investing US$65 million for three main focus areas, namely water, energy and food. Among others, the project targets to fund 30 WE4F innovators​ and ultimately reach one million smallholder farmers, including 250,000 women,” explained Mr Zvarimwa Mashiri from TetraTech, an organisation that is helping in the implementation of the project.

To scale up implementation of the WEF Nexus approach, participants recommended that clear guidelines for implementation of WEF Nexus at different scales be developed and that stakeholders address the gaps in capacity in transitioning the WEF Nexus from theory to practice. The session recommended the need to link WEF Nexus investments to ongoing and existing initiatives such as the continental Africa Water Investment Programme and the Great Green Wall Initiative (GGWI) that aim to mobilise funds for improvement of water security in Africa, as well as to integrate the approach into national plans.

About 40 participants attended the session, which was conducted in a hybrid format on Wednesday, 19th October 2022. Earlier in the day, there was another session that discussed moving the WEF Nexus conversation from theory to practice. The session initiated the process of co-development of WEF nexus scenarios to guide investment planning at various scales. In his keynote address at the session, Professor Mabhaudhi urged stakeholders to collaborate to find solutions to the current gaps.

“Climate, water, food, and health are all interlinked systems and there’s need for integrated approaches that manage trade-offs. Through strengthened partnerships, we can bridge the gap between science, policy, business, and development,” he advised.

WEF Nexus sessions at the Waternet Symposium were held under SADC’s Nexus Regional Dialogues Programme which is funded by the EU.