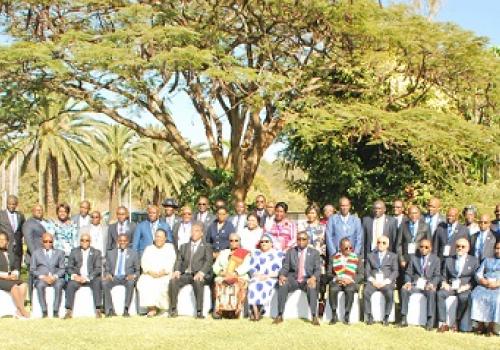 Ministers responsible for Foreign Affairs, Defence and State Security–related portfolios from the Southern African Development Community (SADC) Member States convened in Lusaka, Zambia for the 21st Meeting of the Ministerial Committee of the Organ on Politics Defence and Security Cooperation from 19 July 2019.

The objective of the 21st Meeting of Ministers of the Organ (MCO) was to receive progress reports on the implementation of the decisions made at the 20th meeting and to deliberate on strategic issues in defence, peace and security cooperation, in preparation for Summit in August 2019.

In his opening remarks Joseph Malanji, Minister of Foreign Affairs of the Republic of Zambia and Chairperson of the SADC Ministerial Committee of the Organ on Politics, Defence and Security Cooperation said he was delighted that the region remained relatively stable and peaceful, while promoting the shared values of peace, security, democracy and good governance among all Member States. He added, however, that the region remained alive to the emerging threats of terrorism, transnational organised crimes and climate change.

Hon Malanji called on SADC Member States to redouble their efforts in implementing the necessary measures to mitigate and adapt to the reality of climate change in view of the continuing changing weather patterns that brought severe flooding and drought in most parts of the region.

The SADC Executive Secretary, Her Excellency Dr. Stergomena Lawrence Tax in her remarks, expressed her gratitude to the Chairperson of the Ministerial Committee of the Organ, for his leadership in steering SADC activities in peace and security during the year.

She highlighted that in response to the devastating impacts of Cyclones, measures to operationalize the SADC Disaster Preparedness and Response Mechanism are on ongoing, and that the Secretariat is also mapping the entire disaster management value chain, with a view to putting in place a comprehensive and well-coordinated response mechanism. In this regard, she called upon SADC Members States and Partners to support the operationalization of the SADC Disaster Preparedness and Response Mechanism.

The meeting expresses gratitude to the Chairperson of SADC, H.E. Dr. Hage G. Geingob, President of the Republic of Namibia for launching the Regional Humanitarian Appeal, and noted that, through the Regional Humanitarian Appeal, combined with the National Humanitarian Appeals, an amount of USD 204 million has been raised for the affected SADC countries and communities. The meeting commended the quick response and efforts made by the Member States affected by Cyclones Idai and Kenneth, to save lives and properties of their people and the solidarity rendered by the SADC Community following the effects of the floods and Cyclones; and applauded the SADC Member States and International Partners for availing resources towards the relief efforts for Tropical Cyclones. The meeting approved the immediate activation of the SADC Standby Force Component for humanitarian assistance.

On peace and security, the Ministers noted progress made in the implementation of reforms and national dialogue in the Kingdom of Lesotho, and commended the SADC Facilitator for the continued effective facilitation; and urged the Government of the Kingdom of Lesotho to expedite the enactment of the legislation to establish the National Reforms Authority; and called upon all stakeholders to remain committed to the reforms process.

The Meeting commended the people of the Democratic Republic of Congo (DRC) for holding peaceful elections, and for remaining peaceful in the post-election period. To this effect the Meeting Commended Chairperson of the Organ on Politics, Defence, and Security Cooperation, H.E. Edgar Chagwa Lungu, President of the Republic of Zambia, and the SADC Chairperson, H.E. Dr. Hage G. Geingob, President of the Republic of Namibia for ensuring serenity and the observance of principles of sovereignty and territorial integrity in the course of providing SADC support to the elections in the Democratic Republic of Congo.

Furthermore, the meeting commended the people of the Union of the Comoros, Eswatini, Madagascar, Malawi and South Africa for holding credible and peaceful elections, and commended the SADC Special Envoy, His Excellency Joaquim Alberto Chissano, the Former President of the Republic of Mozambique, for his outstanding role in facilitating the resolution of the political crisis in Madagascar.

The meeting deliberated on the alarming threats posed by terrorism and transnational cross border crime, and approved the SADC Regional Counter Terrorism Strategy and its Action Plan, and Member States were urged to implement the Terrorism Strategy and Plan, and to continue devising preventive interventions against, radicalisation, terrorism and transnational organised crime.

The Meeting Commended Member States who have abolished visa requirements from citizens of all other SADC Member States, and urged Member States to expedite negotiations and conclude bilateral Visa Exemption Agreements to facilitate the free movement of persons within the region.

Noting that Gender-Based Violence (GBV) continues to negatively impact on the socio-economic development of the region, the meeting endorsed the Indicator Framework and Manual to facilitate the implementation of the SADC Guidelines for Crime and Violence Prevention; adopted the SADC Gender Based Violence comprehensive report, and urged Member States to implement its recommendations.  In her remarks, the SADC Executive Secretary, highlighted that, “Gender-Based Violence (GBV) continues to negatively impact on socio-economic development of the SADC Region, as highlighted in the GBV study, which among others, shows that GBV is a common phenomenon in SADC, with prevalence rates vary across Member States. Physical violence ranges between 6% to 34%, sexual violence ranges between 4% to 26%, and emotional violence ranges between 15% to 37%, as such, there is an urgent need to strengthen access to justice for victims and survivors of GBV by creating innovative, and providing alternative solutions including, GBV specialized courts”. Member States were called upon to implement the study’s recommendations through joint concerted efforts.

The Ministers noted the upcoming elections in Botswana, Mozambique, Namibia, Mauritius, Seychelles and the United Republic of Tanzania, and urged Member States to continue deploying SADC Electoral Observation Missions (SEOMs), with a view to ensuring that SADC remains on its democracy consolidations trajectory.