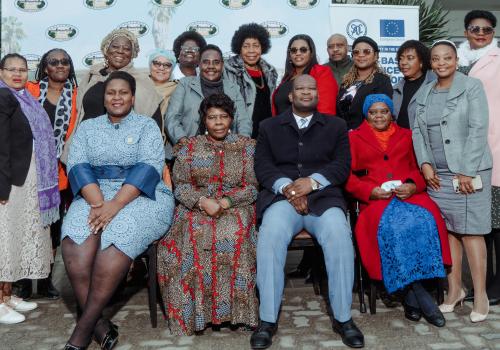 The Parliamentary Standing Committee on Gender Equality, Social Development and Family Affairs (GESDFA) of the National Assembly of the Republic of Namibia, in collaboration with the Southern African Development Community (SADC) Secretariat, conducted a workshop on Gender-Based Violence (GBV) in Swakopmund, Namibia, from 26th to 28th July 2022.

The workshop, held under the theme “Strengthening the legislative and policy response on GBV in Namibia: The role of Parliamentarians”, was aimed at raising awareness and strengthening the capacity of the GESDFA Standing Committee to understand the status of GBV in Namibia so as to be equipped  for the envisaged public hearings on the GBV petition referred to the committee.

The workshop sought to familiarise Members of Parliament (MPs) with national, regional and international legislative frameworks on  GBV and dialogue on the role of legislators in advocating for the prevention of GBV. The workshop also offered an opportunity for a dialogue between the lawmakers and key service providers to engender a holistic and integrated National response.

Speaking at the official opening of the workshop, the Deputy Speaker of the Namibian National Assembly, Honourable Loide Kasingo, said Namibia had over the years witnessed acts of brutal killings, sexual assaults, rapes and physical beatings mostly committed with impunity and without and an end in sight.

Hon. Kasingo said combatting GBV requires a multi-sectoral approach and that the presence of different key stakeholders at the workshop showed that there were collective efforts and willingness to reform and expedite laws and policies concerning GBV.

She noted that the Minister of Justice recently tabled the Combating of Domestic Violence Amendment Bill as well as the Combating of Rape Amendment Bill in the National Assembly, and that the Ministry of Justice had inaugurated a GBV victim friendly court at Katutura Magistrate Court in Windhoek to enable victims to testify without fear. These efforts, she said, were all aimed at changing and strengthening the current legal frameworks to curb the scourge of GBV in the country.

SADC Senior Officer – Public Security, Ms Kealeboga Moruti, said GBV continues to be one of the most notable human rights violations within all societies and that there was growing evidence that GBV is on the increase in the SADC Region. This increase was triggered by various factors that require concerted efforts from all stakeholders to ensure a coordinated approach to effectively prevent and respond to GBV in Namibia.

She said the SADC blueprint documents, Vision 2050 and the Regional Indicative Strategic Development Plan (RISDP) 2020-2030, recognise the prevention and reduction of GBV as a catalyst for attaining peace and security in the RegionIn addition, the 2008 SADC Protocol on Gender and Development (amended in 2016) in particular Articles 20-25, promotes several approaches to address GBV that include legal; social, economic, cultural and political practices; support services; training of service providers; and adoption of integrated approaches, including institutional cross-sector structures, in order to effectively address GBV.

The workshop noted that SADC conducted a Comprehensive Gender Based Violence Study in 2018 aimed at compiling information on the prevalence of GBV and its various forms in the Region; and  look at the status of policies and laws to respond to GBV. The GBV Comprehensive Study documents the GBV prevention and response measures, and identifies the gaps and challenges among SADC Member States.

The study indicates, amongst others, that the most predominant form of violence in SADC is emotional abuse; that on average, over a quarter (26.8%) of respondents in SADC Member States had experienced emotional violence, while slightly over one in every 10 had experienced physical violence (11.2%) and sexual violence (12.0%).  The study further notes that the average proportion of partnered women aged 15-49 experience intimate partner physical and/or sexual violence at least once in their lifetime is 33%.

The workshop also appreciated that  the 2018 study highlights that Namibia is a signatory and party to a number of international and regional human rights instruments such are the Convention on the Elimination of All Forms of Discrimination against Women (CEDAW); the United Nations Convention on the Rights of the Child (CRC); SADC Protocol on Gender and Development and Maputo Protocol. In addition, Namibia also has comprehensive legislative and normative frameworks such as the Combating of Domestic Violence Act Combating of Rape Act No; Constitution of the Republic of Namibia; Child Care and Protection Act; and the Criminal Procedural Act, amongst others.

The workshop was attended by various stakeholders and partners responsible for implementing GBV laws and provision of services such as the Ministry of Gender Equality, Poverty Eradication and Social Welfare; Ministry of Justice; Office of the Prosecutor General; Ministry of Health and Social Services; Namibian Police; Namibia Correctional Service; Legal Assistance Centre; civil society organisations and the SADC-Parliamentary Forum.